View source
watch 01:36
We're Getting Mutants in the MCU - The Loop
Do you like this video?
Play Sound

Valka Castle is a sub area in Endless Ocean 2, and the fourth playable map in the game. It is a 16th-century stone castle that ended up hidden in the waters of Ciceros Strait, after "sinking" several hundred years ago. It is known as a greatly popular salvaging location, with glamorously designed chambers and corridors. It is on this map where the player is first prompted and taught to use the Underwater Pen, although they will gain access to that tool shortly after Chapter 1.

Valka Castle is the only map in the game to not have its default theme music play upon entry; instead, it won't play until the player starts to swim up the Spiral Tower. During the player's first visit, however, Celtic Woman's "Nella Fantasia" will play in the background, once again not until they enter the Spiral Tower. Following the completion of Chapter 2, the song will become available on Nineball Island's jukebox, assuming the player has already purchased it from Nancy.

"Priceless medieval ornaments and works of art still adorn this sunken castle, just as its stone walls house many secrets and legends."

"Prince Valka, a powerful Eastern European aristocrat of the Ottoman Dynasty, erected Valka Castle in the 16th century. Records say that this splendid and luxurious castle was built on a small island in the Aegean, but at some point during the 18th century, the castle sank into the sea overnight.

The exact location of this mysterious castle was unknown until L&L Diving Service discovered it."

Valka Castle is mostly devoid of flora, such as coral. Interestingly, no algae can be seen around the castle, despite it being an environment where it would typically flourish underwater.

In the way of other sea life, however, the halls and chambers of Valka Castle are abundant with rich and colorful creatures. Spiral Tower, notably, is home to the castle's only scalloped hammerheads, who reside near the top.

Each of the small chambers within the castle contains various species of fish, such as meagre, longtooth grouper, red cornetfish, and more. In particular, fish such as blue-green chromis, lined surgeonfish, and bicolor parrotfish are plentiful throughout many parts of the castle. The inner halls and corridors of the castle contain life such as luna lionfish, blue-spotted ribbontail rays, red stingrays, and clown wrasse, who can be commonly seen near the Underwater Gallery.

Valka Castle can be accessed through the Well of the Full Moon, which is located in the ruins of Triton Village; however, the player can only reach these ruins at night, after the raging whirlpools that enclose it have settled. 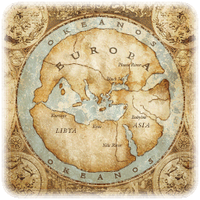 The architecture and design of this castle stands out amongst other locations in Blue World, as it is one of only two purely man-made diving areas in the game, the other being the Cavern of the Gods. Constructed primarily out of stone and glass, it contains a large tower, several small chambers used for purposes such as storage, a rich, life-filled gallery, and a grand ballroom.

The castle also houses much ancient furniture and paintings of note -- in particular, a "flat map of the circular earth" (see right) that serves as a major plot point, and a portrait of Prince Valka himself. The castle also notably features several cleverly-designed locking mechanisms likely meant to thwart thieves.

This unremarkable corridor consists entirely of bland stone and a sandy, rocky floor. It is a small passageway on the western side of the map that leads into Spiral Tower, via a left-facing corner. The player begins here when they enter the Well of the Full Moon, and, by extension, Valka Castle itself, and can also swim back up here to exit Valka Castle.

Located at the end and to the left of the Well Bottom, this uniquely structured, tall tower is filled with several fish, such as lined surgeonfish, meagre, and the castle's only scalloped hammerheads at the top. Common octopuses can be found at the bottom. There are two passages located within this tower, on its second floor: one going north and one going east. The northern one leads to the rest of the castle, whereas the eastern one leads to the Collapsed Gallery. A befriendable false killer whale is briefly encountered near the top of this area.

This is the passage going east in the Spiral Tower. It leads to a dead end that's nothing but a collapsed mess of rubble, but there are still some interesting coral reef fish here, as well as a large barrel that can be found upon use of the Multisensor. Most of the time, this will be an empty oil drum.

As its name suggests, this is where soldiers kept their armor during the castle's heyday. Blue-green chromis and a longtooth grouper are seen here, as well as some creatures under a zoom-mode glow spot.

This is where treasure was kept. Blue-green chromis and meagre are found here. The first time it is visited, it will be locked, but divers will notice a hole large enough for Oceane to squeeze through (who will be with the player during their first visit), and she will open the door from within. Entering this room is necessary on two separate occasions: once during the "Be the Best Trainer" quest, as it serves as one of the false killer whale's hiding spots, and another time to grab the Servant's Ring quest item, necessary for discovering the Golden Catfish.

This is an open, lengthy corridor, filled with large windows through which light streams freely. Here, there are fish of all shapes, colors, and sizes, ranging from large longtooth groupers and clown wrasse down to smaller harlequin sweetlips. Thanatos is also seen lurking outside the windows occasionally, and, later, the Anomalocaris is seen outside of here too.

A giant, glorious ballroom where people had danced when the castle was above water, it is still a perfectly useable ballroom--for fish to dance and swim in. and even a false killer whale are found here.

A luna lionfish guards the throne that sits against the easternmost wall under an awning, but it can be moved aside by drawing with the underwater pen. Doing this will expose the Glorious Key, which opens the door to the King's Chamber.

The Ailouros Pearl can be found under a zoom-mode glow spot in front of the throne provided they are partnered with Oceana, and the Phantom can be seen here at night (only after beating the main plot). Thanatos can be seen outside of the windows here as well. In addition, the scarred false killer whale ends up here when the player finally befriends it.

Just outside the ballroom, there is a door that is locked on the other side, but can be opened on the side the diver is currently at.

This is the chamber in which the mighty Prince Valka resided. It is opened by using the Glorious Key. It has a portrait of Prince Valka himself on the wall, which gives a clue about how to open the Secret Room.

A small room connected to the King's Chamber. It is opened by moving the book entitled Clavis (key in Latin). There are many cloudy catsharks on the floor here, as well as a few salvageable items.

Valka Castle is one of the most important areas in Blue World, holding not only many secrets and treasures that prove to be a valuable aide in the quest for the Pacifica Treasure (such as the Okeanos Tablet and flat map of the circular earth), but also serving as an area that hosts many legendary creatures, quest plot points, salvage requests, and more. The castle serves as the fourth main area explored in Blue World, following Gatama Atoll, Deep Hole, and Ciceros Strait, and is a crucial turning point in L&L Diving Service's quest for the truth behind the Song of Dragons.

During the main storyline, the player and Oceana first discover the castle by complete accident, having swum down the Well of the Full Moon to escape Thanatos, who was ambushing them in Triton Village. While exploring it, the pair makes their way through the Underwater Gallery and into the decorous Mermaid's Ballroom, where they find a throne against the east wall and a closed - but unlocked - door; opening this door leads to a smaller room with two locked doors. One of them can be unlocked from this side, and leads to a room near the entrance; the other is a set of double-doors that is locked tightly. The player and Oceana must retrieve a key called the Glorious Key in order to enter here; however, the key sits on the throne, 'guarded' by a lone luna lionfish.

After luring the lionfish away with food or the underwater pen and retrieving the key, the player and Oceana enter the King's Chamber to investigate. Eventually, an inspection of the portrait of Prince Valka on the wall offers a hint that leads to the discovery of a single, intact volume on the bookshelf on the opposite wall. Tellingly, this book is titled "Clavis", the Latin word for "key".

The player character pulls on the tome to reveal a hidden bookcase door that swings open. The moment this occurs, however, the Song of Dragons also plays, and the door to the King's Chamber itself swings shut as a result, locking them inside. After the player finds the Okeanos Tablet in pristine condition in the Secret Room, they realize that Prince Valka must have visit this place frequently - and so must have had a way to reset the trap from inside the room.

Upon taking a closer look at the desk, it turns out that there's a lever beneath it. Pulling on the lever itself does nothing, but it does seem to move some mechanism in the door; the player and Oceana must pull the lever beneath the desk and pull on the door simultaneously to open it again. At that point, a North Atlantic right whale swims past the window of the King's Chamber, presumably the one responsible for singing the Song of Dragons.

The player and Oceana leave with their newfound treasure: the Okeanos Tablet found in the Secret Room - and the mysterious writing upon it. News of their discovery subsequently spreads around the world, earning L&L Diving Service some extra exposure and unlocking the ability to take Diving Guide and Photo Requests.