View source
watch 01:36
We're Getting Mutants in the MCU - The Loop
Do you like this video?
Play Sound
← Cacao MaharajaEndless Ocean 2 CreaturesBlack Harbinger →

A massive, jet-black shark whose body is covered with scars, retaining the trademark white belly of its species, and long, patchy-colored, heavily-scarred fins.

Thanatos is a legendary great white shark who appears in Endless Ocean 2, acting as the first "boss" in the game. He is rather enormous even by his species' standards, with a menacing, battle-worn appearance. Residing in Ciceros Strait, he is feared by the locals for his aggressive tendencies and allegedly enjoys capsizing boats.

The title "Lone Shark" is obtained by focusing on him, making him the only plot-relevant legendary to come with its own title.

"This enormous great white shark is feared throughout the Aegean Sea, where it is seen as the embodiment of evil and violence.

It actively attacks people and boats and has caused a number of brutal incidents. The many scars on its body are proof of the countless battles it has fought, and its cunning has helped it to evade all human attempts to ensnare it.

This creature is a monster created by ferocious fighting and years of experience which can be seen all over the world, but only rarely."

"Normally, a great white shark would not go out of its way to attack humans. Almost all attacks are the result of the shark mistaking the person for a seal or some other creature it considers food. That means shark attacks are rare, only a few each year. But despite this, humans kill thousands of tons of sharks every year to boast, or simply out of pure fear or loathing.

Is the emergence of a creature like Thanatos, which hunts man alone, the revenge of Mother Nature?"

Thanatos is the first of three legendaries to play a role in the main story of Endless Ocean 2. His existence is hinted at by GG upon arrival in Ciceros Strait, but the player is not formally introduced to him until they discover the Triton Village Ruins later on at night. There, GG again warns them about Thanatos, before quickly swimming off. Shortly thereafter, Thanatos finally shows up to attack the player and Oceana, accompanied by two standard great white sharks; the pulsar is used to calm both of the smaller specimens, but has no effect on Thanatos whatsoever. The player and Oceana have to evade him by swimming into the Well of the Full Moon, where he cannot follow, as he is far too large to fit. Subsequently, the pair discover a secret passage beneath the Well that leads to the ruins of Valka Castle.

Thanatos makes another appearance in a notebook mission entitled "Memento", making him the only legendary creature to be featured in both the main story as well as a side-quest, and also one of two legendaries who can be encountered in more than one part of his home map. A woman named Marzia asks the player to help her obtain an item from a wrecked ship, the Pride of Athens, the same ship that her father disappeared in when it sunk. Thanatos appears while the two are inspecting the wreck, this time without his cronies, and the player has to deter and distract him until Marzia can open the door to the ship, at which point he swims away.

Aside from the scene at Triton Village and the "Memento" quest (and in spite of the fact that he is rumored to haunt the entirety of Ciceros Strait), Thanatos is found solely within coordinates H-6 and H-7 of that map, near the Wreck of the Emerald Lady. He swims at the same height as the surrounding great white sharks in the area, at a depth of around 75 ft. (23 m).

Additionally, Thanatos can be seen outside the windows of Valka Castle from time to time. He cannot interact with the player and does not attack them, preferring to menacingly swim past the windows of the Underwater Gallery, the Mermaid's Ballroom, the King's Chamber, and the chamber adjoining the two on the eastern side of the map. 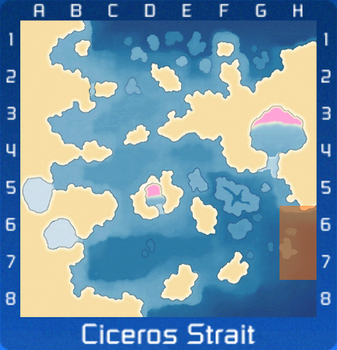 Oceana: "Whoa! That's an enormous great white shark! Is this what GG was worried about? The man-eating shark Thanatos? Oh no! He's coming this way! If we don't do something about him, we won't even be able to surface! Can you use the Pulsar?"

Oceana: "I don't believe it... The Pulsar has no effect! We've got to get away from him... There's got to be something we can do!"

"This is Jean-Eric! A huge object has just appeared on the ship's sonar. It's the man-eater Thanatos! What's he doing here at a time like this?! It's too dangerous for both of you to try and escape. Your first priority is the safety of your client! You have to distract him until Marzia can open the hatch! Don't let Thanatos get anywhere near Marzia--but it's also dangerous to get too far away from her! Buy her some time by distracting him, but try to stay close!"

Thanatos spends the majority of his time near the Wreck of the Emerald Lady. He swims around here relatively slowly, cycling in and out of the map (as the only creature in the game to do so) in a circular pattern, with approximately a minute between him leaving and re-entering the map. Even while antagonizing the player, he will not chase them away from the wreck.

Unlike his counterpart from the last game, Thanatos is highly aggressive and will attempt to attack the player as soon as they swim near him. As the player unfortunately learns during their first encounter with him, Thanatos cannot be calmed with the Pulsar, so if spotted, the best course of action to evade him is to swim in unpredictable vertical columns and attempt to make sharp turns. If Thanatos comes near enough, he will slap the player with his tail; during his story encounter, this will remove one bar of oxygen from their tank, akin to other sharks, while he removes two bars in subsequent encounters.

During his encounter in the "Memento" mission, if the player remains at a certain spot right in front of Marzia, it is actually possible to avoid Thanatos' attacks completely, preventing the need to protect Marzia and making the mission far easier.

Much like his base species, as well as most other legendary creatures, his trivia can be gained by taking a picture of him. Given his ferocity, and the fact that this can only be done by focusing on him, such a task can prove difficult, as Thanatos can kick the player out of Camera mode by attacking them.