Night only
The Goblin Shark (Mitsukurina owstoni) is an ancient species of shark found in both Endless Ocean and Endless Ocean 2.

It is renowned for its unnerving appearance. Due to its deep-sea habitat, humans don't encounter it very often in the wild, but it is luckily not a very fast swimmer, nor an adept pursuit predator. While not entirely confirmed, it is thought to be more of a slow-moving ambush hunter.

“These fish have soft, spindle-shaped bodies with long, flat snouts. Their dorsal and pelvic fins are round, while the upper portion of their tail fins are very long. Goblin sharks are white with pink highlights and can be seen year-round in deep ocean corridors.

Their teeth are thin and long and point slightly inward. Their most distinctive feature is the jaw, which can actually be pushed forward until it protrudes from the mouth. After death, their entire body becomes swollen with blood and turns bright red before fading to brown.

They use sensory organs on their elongated snouts to search for food along the ocean floor. When a meal is located, they shove their jaws forward to retrieve and swallow it. The genus name Mitsukurina is named after a Japanese biologist who first brought the shark to the world’s attention. The species name owstoni is named after the collector who acquired the first specimen.”

"The front of this creature's head is elongated, giving it a monstrous appearance It is white with a hint of pink, and when it dies it becomes red due to congested blood. As time passes, it eerily changes to a chestnut colour. It feeds on creatures of the ocean floor, protruding its jaws and swallowing down prey. This is when it looks especially monstrous."

Oceana: "Whoa! Look over there! Sharks! Oh, wow... They're so cool! Look at their crazy mouths! How is that even possible?"

Jean-Eric: "Those are goblin sharks. They're very rare and only found in deep waters. They aren't aggressive toward humans. Well... that's what I've read, anyway."

Hayako: "Uh, they seem pretty agitated... They're coming straight for us!"

Jean-Eric: "Then you've got no choice! Quick! Use the Pulsar to subdue them! Buy some time while GG tries to figure out how to open the stone door."

After the main storyline, a small group of these can be found in the Pillars of Shadow area, but only at night. The player can also encounter a pair of them during a part of the main storyline in the Celestial Mausoleum.

The only goblin shark in the first game swims slowly around the Graveyard, staying close to the ocean floor. It likes being offered food and stroked. It often swims through the ribcage of the whale skeleton that adorns the area. This goblin shark is not hostile, like all other Endless Ocean wildlife.

In this game, the goblin sharks are hostile and will attack the player if approached. They are often in the company of their older and more grotesque cousin (story spoilers). They can be placated for a short amount of time using the Pulsar, but they shake off its effects rather quickly compared to other predators. They are also distinct from other dangerous creatures, in that they seem to have a much wider detection range; the ones in the Pillars of Shadow tend to hover around the mid and lower levels of the room, yet they still have a tendency to swim up and attack players near the top.

They are the only deep-sea shark in the game to not have any unlockable trivia. 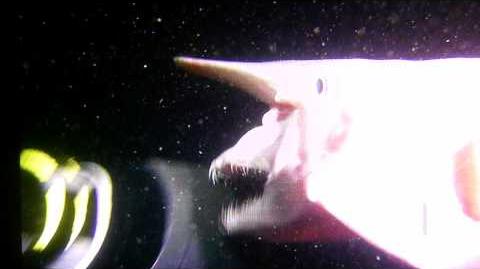