The Aquarium, located in Japan, is the workplace for Hayako Sakurai, found in Endless Ocean: Blue World. The featured animals can be changed frequently by the player character. It is recommended that the player change the animals frequently so as to not bore the visitors. The Player can ask Hayako in the Staff Room what the visitors currently want to see to attain the best visitor numbers. The Aquarium is world-famous for its main attraction, the enormous acrylic tank that can even contain a Blue Whale.

The aquarium consists of three main areas: the Main Tank, the Marine Life Annex, and the Small World Gallery.

During the quest "Save the Aquarium" visitors come in the aquarium. These people though are holographic and they disappear when you walk through them.

All species in the Marine Encyclopedia can be displayed here, aside from all but one Legendary Creature; the Ancient Mother can be placed in the Main Tank after unlocking the trivia for every creature in the encyclopedia, as was also the case in the first game.

This is a huge tank that can contain any animal that the player has discovered and added to their Marine Encyclopedia. It can house animals of three size classes - small, medium and large - but there is a limit to the number of animals that can be displayed at any time. The Large size class is generally made up of large whales, the Medium contains dolphins, sharks, turtles, rays and large fish, and the Small one is made up of small miscellaneous animals like reef fish and jellyfish.

The player may dive in the tank and interact with the animals, albeit to a limited degree compared to in the wild; they cannot give creatures food, nor make usage of the Underwater Pen or Multisensor. They can, however, make use of the Camera, allowing them to more easily take pictures of particularly rare animals. In addition, if the player chooses to place a dangerous creature in the tank, then they can dive alongside them without a care, akin to the first Endless Ocean game. They can also sit on the bench and watch the animals swim endlessly in the tank's depths.

This room has many small tanks where animals in Zoom Mode can be put on display. There is one tank for every habitat the player encounters. Because the Aquarium is introduced very early in the game's storyline, many tanks, such as the freshwater and deep sea ones, cannot be curated until much later in the game, after the player has unlocked areas of such habitats. Unlike the Main Tank, all animals are of a fixed size class and only four can be placed at a time.

This area is where aquatic animals that can go onto land are displayed - seals, penguins, crocodiles and the like. It consists of a sandy shore next to a medium-sized tank. However, with the exception of Sea Otters, the animals never enter said tank, instead staying on land. As with the Small World Gallery, the creatures are all of one fixed size class and only four animals can be displayed at any time. 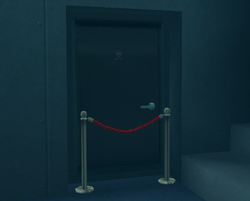 A small room where the player may consult Hayako about various issues. It is highly recommended that the player visit her frequently, as she is the only way to get information on visitor numbers, the kind of animals the visitors want to see, and visitor feedback. This is important, especially for the "Save the Aquarium" mission in which one million visitors must be attained. It is also the only place where the player can receive payment for their curating duties.

"Located a mere 15 minutes from the nearest train station, this aquarium complex is one of the largest in the world. Its centerpiece is a missive acrylic tank large enough to house whales. You can see everything here, from the very smallest sea creatures to huge marine mammals."

Add a photo to this gallery
Retrieved from "https://endlessocean.fandom.com/wiki/Aquarium_(Blue_World)?oldid=33255"
Community content is available under CC-BY-SA unless otherwise noted.