She is a massive albino blue whale reaching 110 ft. in length, well beyond the usual size of blue whales (75-90 ft), who is said to bring good luck and protect the seas. In Blue World, the title "Amazing Sleuth" is obtained by discovering her.

"This is the white whale spoken of in ancient legends of Manoa Lai. With a body even bigger than that of a blue whale, it is the most massive animal on earth. The beautiful, unblemished white skin has inspired many with a sense of the sublime or divine. She can be seen at the Great Drop-Off.

By external appearance, this animal strongly resembles a blue whale, yet the DNA is slightly different. This suggests that the Ancient Mother is a completely new species. The white coloring seems to be normal for this species, but because it was so recently discovered, little to nothing else is known about its feeding, mating, or living habits.

Ancient legends passed down through generations say that this whale is the protector of the seas around Manoa Lai. All Pelagoans hear these legends from cradle to grave, but as the whale had never been seen by human eyes, it was regarded as an object of faith by some or a fiction by others."

"A new species of baleen whale discovered a few years ago in the Manoa Lai Sea of Paoul, South Pacific, attracting attention from all over the world. There is little known about its ecology and behavior, although your recent discovery shows that it migrates from the South Pacific to the North Pole and back again. Its scientific name is also yet to be decided."

[ Twilight of the Sacred Mother ]

"This whale, known as the sacred and loving Ancient Mother, has been worshipped as the origin of all life in Paoul since ancient times. Searching for her, harming her or hunting for her were seen as blasphemy. But since she was confirmed to really exist these beliefs started to fade away. Souvenir shops in Paoul's capital have already started marketing Ancient Mother merchandise."

Spoilers for Endless Ocean ahead!
In Endless Ocean, finding the Ancient Mother is the main focus of the storyline, although she is not addressed right away. In order to discover her, the player must have filled in a great deal of the overworld map, explored all of the caverns in the Abyss, explored all of the Great Aqua Cave, and discovered the Prince's Room in the Underwater Ruins of Mo'ia Atoll. The former three are all prerequisites for discovering the Ruins in the first place.

The player will subsequently receive an email about Catherine and her odd behavior from Douglas Banner, who suggests going to Green Garden to get a hint about her past. The player will subsequently find a relic belonging to Catherine's deceased father, Patrick Sunday. The pocket watch prompts Catherine to reminisce about her and her father's past, and thus she reveals her reason for being out at sea despite her fear of the water: her need to discover the Ancient Mother and thus fulfill her father's mission to prove himself to the scientific community.

She asks the player to help her in her mission and requests that they have at least one encyclopedia entry for each of the four large whale species that frequent the region: the humpback whale, the North Atlantic right whale, the blue whale, and the sperm whale. This is done in order to gather information about migratory habits and hopefully find a route the Ancient Mother may commonly take in her trips around the region.

After this is done, Catherine suggests going to the Abyss with a dolphin partner to see if they could help the player find any signs of the Mother. When the player does as she suggests, the player's dolphin partner does indeed find a biological sample of something similar to a Blue Whale, but after sending it off to a lab and waiting for a day or two, the results show that it's different enough to warrant significant interest. This news spurs Katherine into action, and she asks for the player's help in setting up five motion-detecting devices around the region. The locations include the Abyss (closer to the surface), the Southern edge of the Great Drop-Off, the Northern edge of the Great Drop-Off, near Rock Bluff, and in the Green Garden.

After these are placed (and the player avoids a grim fate via kelp), Catherine says simply to wait until an email notification is received about the motion sensors detecting something larger than a blue whale (which is what the biological sample suggested the size of the source animal would be). Once this notification is received, the player must go to the location the email says the motion was sensed at - the detector at the northern edge of the Great Drop-Off. There, the Ancient Mother then appears, and the game's credits roll over various scenes of her swimming.

After the player fully completes the game's Marine Encyclopedia, Katherine will inform the player about some clients requesting more data on the Ancient Mother, thus unlocking the ability to place her in the Aquarium.

Following the completion of the main storyline, as well as the "Dolphins and Whales" section of the Marine Encyclopedia, the Whale Ornament will wash up on the beach of Nineball Island. Jean-Eric will explain its connection to a mythical whale, and this will trigger the Notebook's Special Request entitled, "Ancient Mother".

As soon as this happens, the Ancient Mother can be found patrolling the Ice Mosaic area, in the North Coast of Canada. She can also be placed in the Aquarium after fully completing the encyclopedia.

The Ancient Mother is first found swimming around the Great Drop-Off at the ending of the main storyline of Endless Ocean. Following the end of the story, she can be found at the Great Drop-Off in only four months out of the year - January, April, July, and October.

The Ancient Mother can then be found patrolling the Ice Mosaic area, in the North Coast of Canada, following the Notebook quest entitled "Ancient Mother". She travels the map in circles during both the day and night. 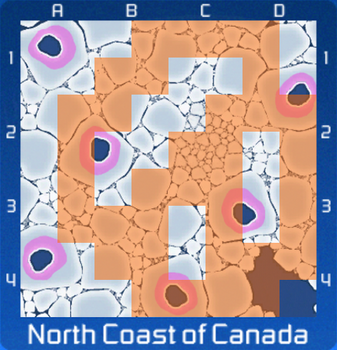 The Ancient Mother behaves just as any regular whale would, patrolling the northern area of the Great Drop-Off. The player can gain her favor by using the Sea Whistle in her presence, though offering her food and petting her also work.

The Ancient Mother patrols the North Coast of Canada in a circular pattern. She remains approximately 20-30 m below sea level for most of her swim period but will dip down to a maximum depth of ~80 m as she approaches the leftmost side of the map.

Her trivia can be unlocked by using the Sea Whistle while she is nearby.

Retrieved from "https://endlessocean.fandom.com/wiki/Ancient_Mother?oldid=33598"
Community content is available under CC-BY-SA unless otherwise noted.